Rainer Mehl, Kitsilano graphics teacher and tour organizer for the Kitsilano Japan tour for many years, and I talked at the Kitsilano 100th Anniversary weekend last May.  While catching up,   I said I was attending SCCP the following year.  He had never visited Shigaraki and thought  it might be possible to come with a group of students while I was here, and he made it happen!

He arrived with 20 boys and girls and French Immersion teacher Ann Port.  He had kept the planned visit a secret from them and all, especially Anne, were surprised.  Many of the students had no art background but were very interested in the facilities and work the resident  artists were doing, some not much older than them..  I believe there are no programmes like SCCP in Canada although there are smaller facilities that do offer residencies, and of course some university arts programmes.

They were a great group of young people – inquisitive about the artists, interested in things Japanese and also enjoyed the lunch at the on-site restaurant Rainer’s wife had arranged with Eri Noto at Brown Rice and Water. It was lovely to see them and I am very appreciative of the effort it took to get here.  They are on their way to a home stay, the last leg of their visit!  How fortunate they are to have teachers who take them on an adventure such as this and I am sure it will not be the last time many of them visit Japan after this introduction. 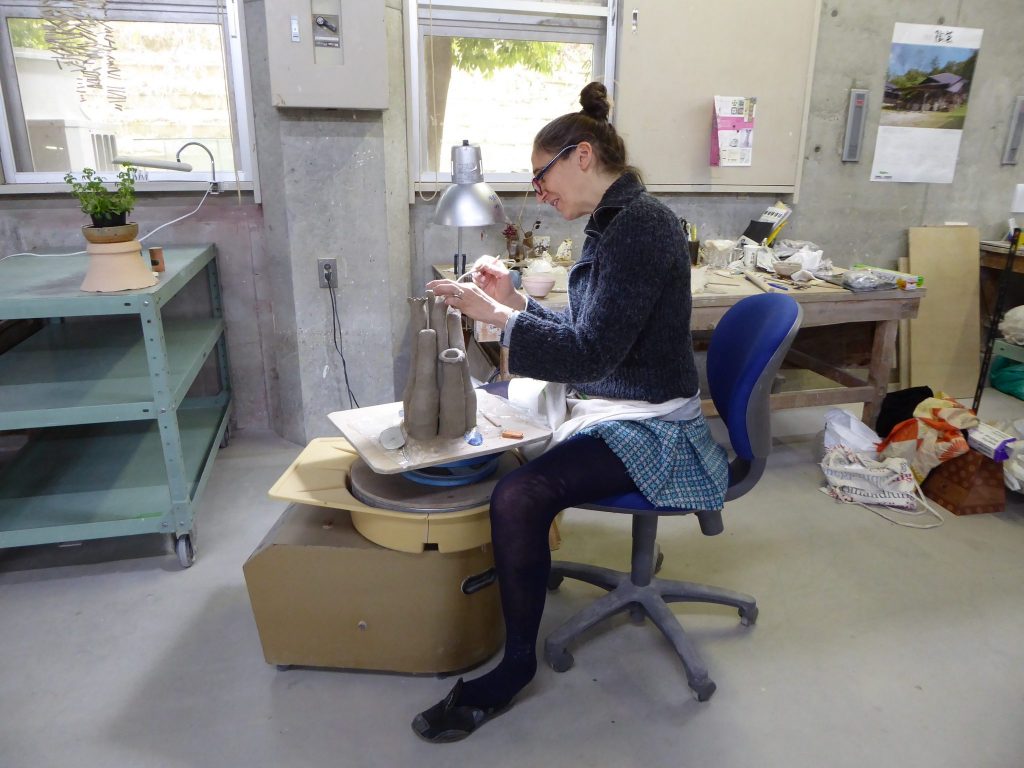 Ariel concentrating on her forms

I asked Amy Kennedy (blog post on February 28th) what we should know about Ariel Gout.  Ariel has been at SCCP since January 4th and Amy joined shortly after and they have become friends.  Words such as “inquisitive, hard working and particularly sensitive to working in the 3rd dimension”   and  “Ariel’s forms have improved so much in such a brief period of time ” were voiced.  Arie’s works are currently on exhibit in ‘Submarine Landscape’ at SCCP.

Amy’s comments were intriguing since Ariel has been working in clay only since her arrival at the residency!  Ariel is from originally from Paris, France, and her business card indicates she is a citizen of Berlin, Paris and Boston. Her recent background is in in painting and drawing, receiving a Studio Art Diploma from the School of the Museum of Fine Arts, Boston, in 2009.  She then moved to Berlin in 2010 and has completed residencies in the Virginia Centre for Creative Arts, Woodstock and three other states as well as New Mexico, France, Spain and Berlin. Check out her work at her website: www.arielgout.blogspot.com 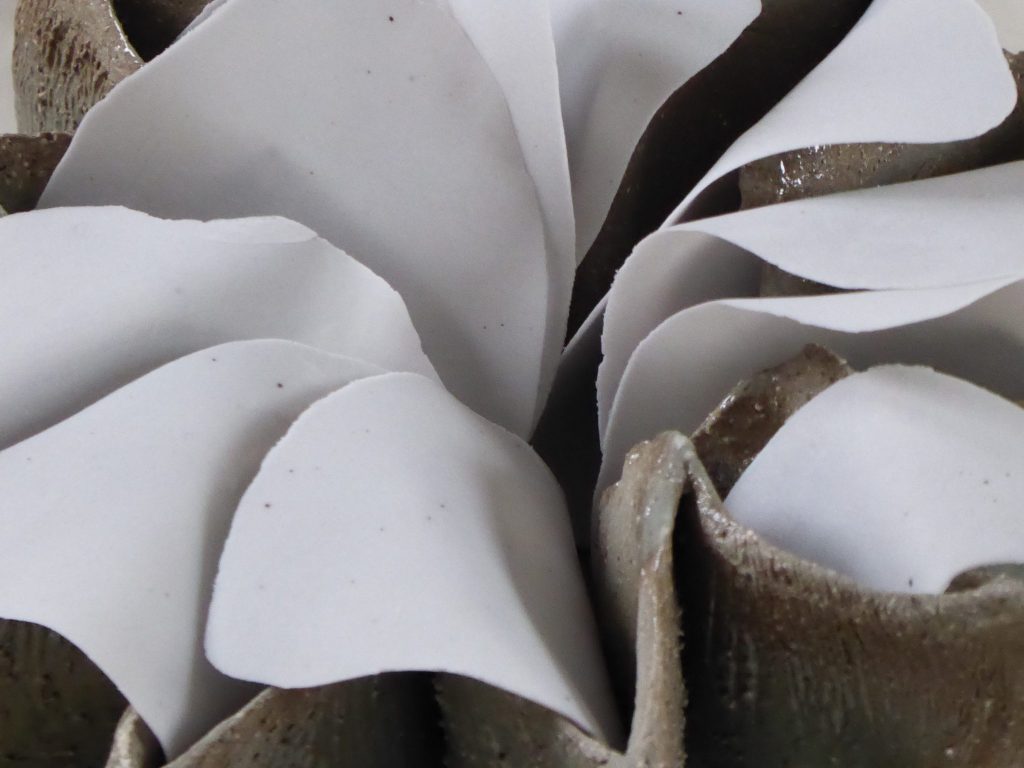 you can imagine the forms swaying in the water

Upon arrival at Shigaraki, all residence artists are required to have an interview with the SCCP Admissions Committee (it is necessary but a little intimidating) to tell them what we require, what we hope to achieve and how we plan on doing this.  We submit these plans in our initial applications. Ariel said she wanted to transpose the lightness of the negative space of her ‘Palm, Pebbles’ installations into three-dimensional clay sculptures. She had doubts about being able to achieve this since the expectation is that artists accepted here have some knowledge about how to proceed and it is made clear that the technicians role is not to teach, – but they will and do facilitate the working situation. 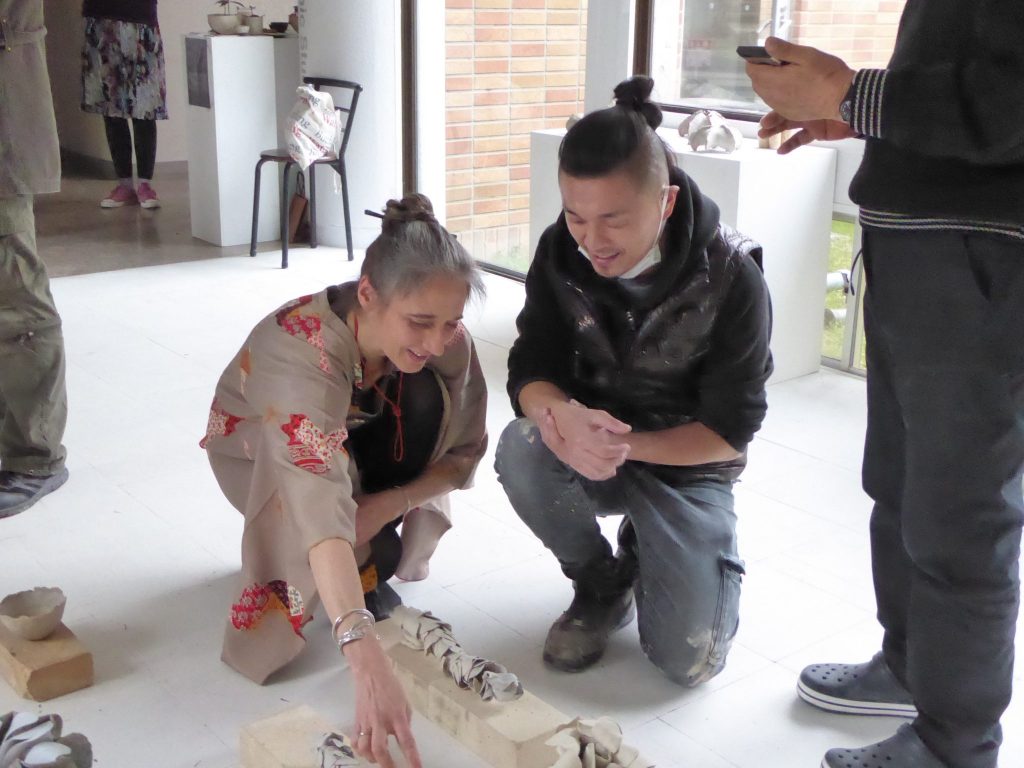 Ariel has a deep love for what she does and is particularly in tune with the Japanese aesthetic and culture, so she began her work and was soon ‘captured by clay’ a feeling many of us are well acquainted with!  Ariel’s experience in Japan has been important to her as she worked intuitively, taking time to think about her work in relation to the sensibility she has experienced with beauty and nature around her while here. 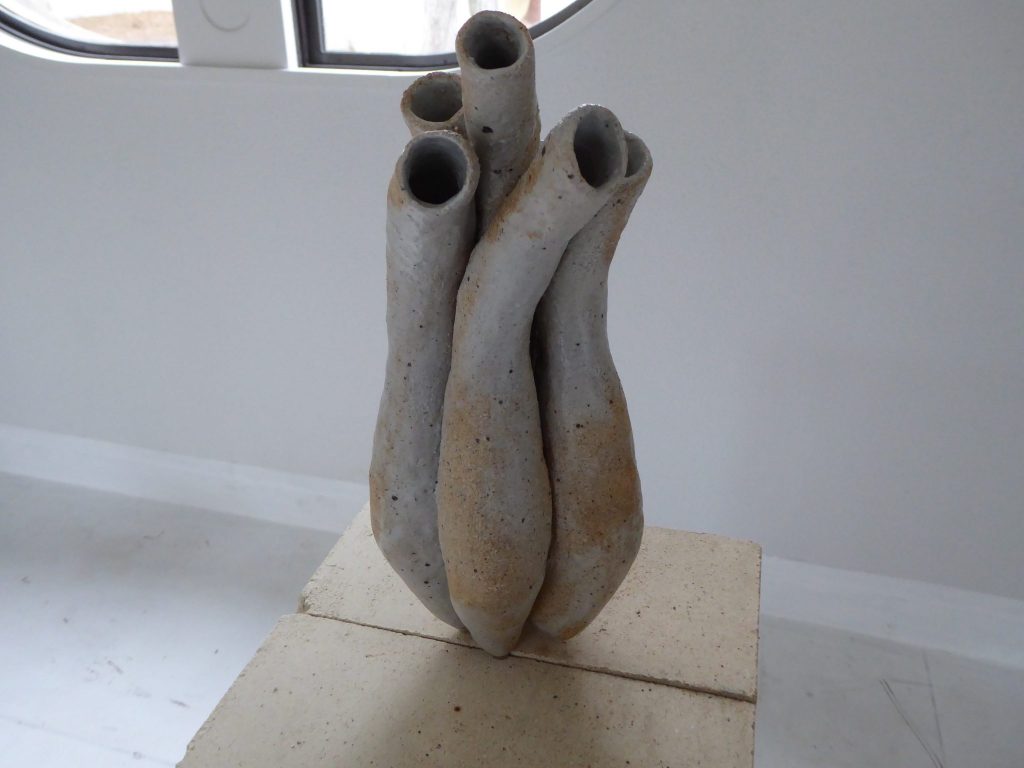 a feature sculpture in her ‘Submarine Landscape’ exhibit

She is not sure what is next, but will return to Berlin, a city of new growth and take some time to think about her next steps. She says her real desire is to return to Japan, further study ceramics and the Japanese language.

2 thoughts on “Kitsilano Students at Shigaraki!”